Slow pace of economic recovery, with GDP expected to grow 1% in 2016, and inflation remaining stubbornly low. 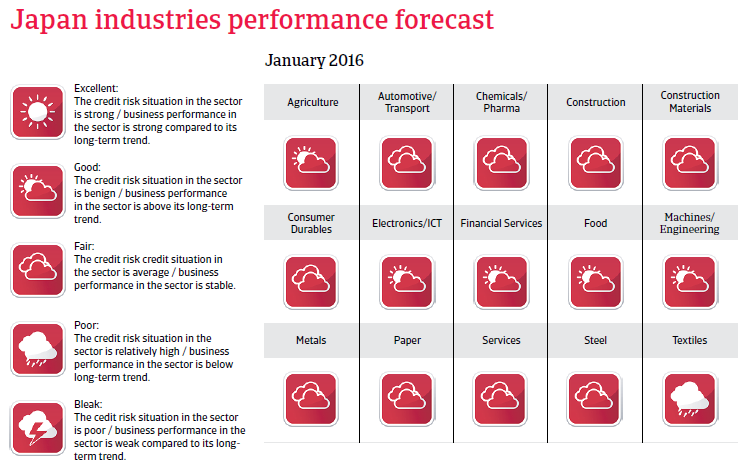 Since 2009, annual corporate insolvencies in Japan have decreased. However, smaller players in some sectors like retail and construction are more vulnerable due to shrinking margins. Additionally, businesses that rely on imported products also face increased expenses due to the depreciation of the Japanese yen, which could hurt their financial resilience. 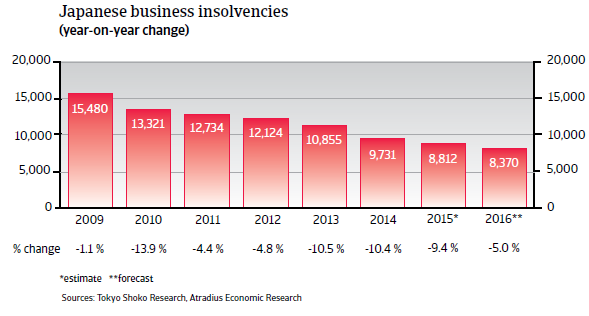 Ruling coalition firmly in control with a robust legislative mandate

In the 20 years leading up to 2013, Japan suffered from very low inflation, with bouts of deflation and low economic growth. Deflation depressed domestic consumption as businesses and consumers alike delayed purchases in the hope of getting a better deal in the future.

Prime Minister Shinzo Abe, who came into office in December 2012, immediately launched drastic measures to turn around Japan’s contracting and deflationary economy. Abe devised the so called ‘three arrow’ approach, now dubbed ´Abenomics´, consisting of drastic monetary easing, fiscal policy measures and structural reforms. In July 2013, he secured a comfortable majority in the Upper House, followed by a victory in the December 2014 snap elections, as he was able to maintain a two-thirds majority of his centre-right coalition government consisting of the Liberal Democratic Party (LDP) and the smaller Komeito Party. 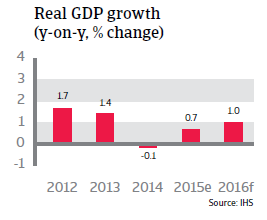 In 2014 GDP growth shrank slightly (down 0.1%), mainly due to a 1.0% contraction in private consumption, which accounts for around 60% of the Japanese economy. The decrease in household spending was due to a value added tax increase in April 2014, implemented in order to consolidate the high public deficit.

With GDP growth of 0.7%, the pace of Japan´s economic recovery remained slow in 2015, with both private consumption and industrial production contracting. While growth was sustained by lower energy prices, an accommodative monetary policy and yen depreciation, the large monetary and fiscal stimulus still struggled to significantly boost higher growth and inflation. Rising business profits have so far not translated into wage growth and business investment, while inflation remains stubbornly low, expected at 0.4% in 2016. 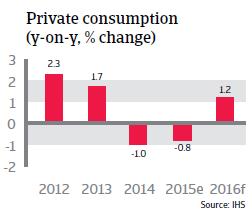 This comes as a disappointment, given the large fiscal stimulus measures and the fact that since 2013 the Bank of Japan has widely expanded the monetary base through the purchase of long-term bonds (quantitative easing) in order to devalue the Japanese yen - to promote exports, discourage imports and generate inflation. By expanding the amount of cash in circulation, businesses and consumers should have more cash to spend.

In 2016 the economy is expected to grow 1.0%, assuming the benefits that the ultra-loose monetary policy provides to private consumption and private sector investment finally bear fruit. 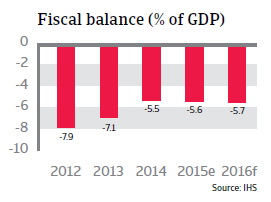 Following a long period of loose fiscal policy, the Japanese government is struggling with extremely high public debt (more than 225% of GDP in 2015). Japan relies mostly on domestic creditors to support its government debt (about 90% is held by Japanese investors), which makes the funding base less susceptible to capital flight. But maintaining this level of debt is costly and further increasing government debt would at some point render it unsustainable.

Will structural reforms be implemented at last? 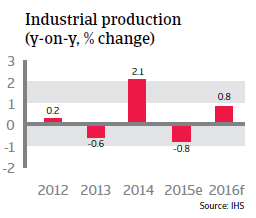 Japan faces some major challenges. Beside the high fiscal deficit the country faces demographic challenges: the population is shrinking and the working age population is also declining. Without appropriate measures, Japan will inevitably face a shrinking tax base and rising expenditures on retirement benefits. Many industries already face some difficulties due to a lack of workforce, leading to higher labour costs and hurting their international competitiveness.

To achieve a sustainable rebound and to boost the country’s long-term economic performance, there is an urgent need to make the labour market more flexible, to end protection for farmers, doctors and pharmaceutical companies, and to introduce more business deregulation. The government has repeatedly announced its intention to tackle those issues in its current term, but all of those reforms are still vehemently opposed by powerful interest groups. Still it remains to be seen if and when deep structural reforms will be made.

Most of the survey respondents in Japan (32.5%, notably above the 23% in Asia Pacific) consider cost containment to be the biggest challenge to business profitability this year.

The sector benefits from higher machinery investments as the Japanese economic recovery is on track (GDP is expected to grow 1.0% in 2015 and 1.5% in 2016 after a modest contraction in 2014).

The insolvency outlook for 2015 has weakened and difficulties are expected to continue into 2016.