Many German Tier 2 suppliers face the issue that their products are easily substitutable, while their solvency and equity position is generally weak. 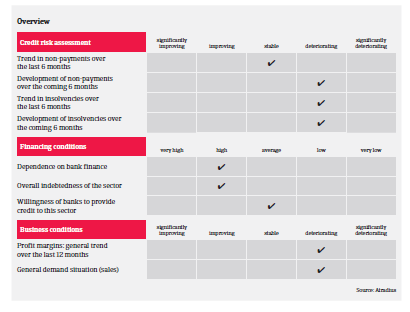 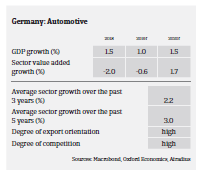 The German automotive sector is facing tougher times ahead, with decreasing demand and fundamental structural challenges. It seems that the benign times of very low insolvencies and few payment delays are over for now.

According to the International Organisation of Motor Vehicle Manufacturers (OICA), car production in Germany decreased 9.3% in 2018, and demand is decreasing further in 2019. While domestic new passenger car registrations increased 0.5% in H1 of 2019, they fell 3.1% in the EU, a core market for German car sales.

The sector faced significant challenges in 2018 and H1 of 2019 (WLTP, diesel scandal, decreasing sales in China, looming threat of US tariffs, shift to e-mobility, increased use of car sharing models), which have resulted in a performance decrease of OEMs and suppliers alike.

Most of those challenges will become even more urgent to tackle in the coming years. Currently it seems that OEMs and suppliers have to quickly change their business models, away from focusing on combustion engines (especially diesel).

At first sight it seems that OEMs and Tier 1 suppliers are suited for that shift. Despite the current decline in turnover and profitability they own a strong global market position and their solvency and liquidity situation is still good. Due to good earnings in the past the majority of companies still have adequate equity positions to cope with high capital expenditures in research and development, necessary to stay ahead of competition in new trends and technologies (electric motors, connected driving, autonomous cars). However, given the still unclear future of the global car market a major challenge is to decide where to strategically invest in order to gain the right technology that will determine the future of cars (e.g. hybrid, e-cars, autonomous driving).

The challenge to adapt their business models is even larger for Tier 2 suppliers, especially those active in delivering parts and supplies for combustion (diesel) engines. Many Tier 2 suppliers face the issue that their products are easily substitutable. At the same time their solvency and equity position is generally weaker and pressure on margins is already high, due to increased material and labour costs, rising competition and price pressure from OEMs.

A large number of Tier 2 suppliers have been severely affected by the current sales downturn, and it remains to be seen if they have enough innovative skills and the capital to finance a quick and substantial change in their business models.

Smaller suppliers could struggle for existence

It seems that a large number of smaller suppliers could face higher credit risk in the future, as they have difficulty in climbing up the value chain. Payment behaviour in the sector has been good in 2017 and 2018, however, we have noticed an increase in payment delays since the end of last year and expect this negative trend to continue.

Since the beginning of 2019 we are seeing an increasing number of suppliers with worsening financials (declines in turnover and profitability) and covenant breaches, while the number restructuring cases has substantially increased. When underwriting the industry, we pay particular attention to the most recent financial information available (balance sheets, interim figures, bank status, payment terms, duration of contract, order volume, payment behaviour).

It seems that many German automotive businesses can cope technologically and financially with the necessary business model shifts. However any major market disruption (e.g. US import tariffs, an escalation of the Sino-US trade dispute, a global recession) could decisively weaken businesses financials – just at a time when major investments are needed. This downside risk could lead to a major shake-up of the industry, with a sharp increase in payment delays and insolvencies, especially in the suppliers segment.

Due to the more difficult market environment and decreasing sales, we have recently downgraded the sector performance outlook from “Excellent” to “Good”.

Despite further sales growth most businesses continue to operate on very tight margins due to fierce competition, while equity strength is below average.

Of the Western European countries surveyed, Germany had the second highest percentage of respondents (24.7%) who reported revenue loss due to overdues.