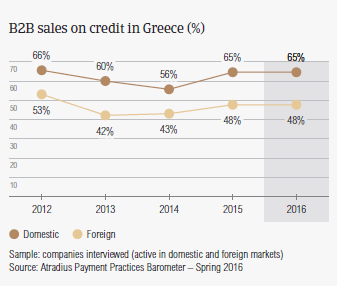 Unlike last year, however, Greek respondents appear to be much more likely to request payment methods from B2B customers which do not expose them to payment risk. This is not surprising for a country where a further 5% increase in business failures is forecast for this year. Evidence of this more risk-averse behaviour of Greek respondents can be seen in the considerable decrease in the proportion of B2B sales made on credit over the past year. This decreased to an average of 56.5%  of the total B2B sales value (average for Western Europe 41.2%), from 65.1% one year ago. Despite this considerable reduction, Greece stands out as one of the most inclined countries in Western Europe, along with Sweden and Denmark, to use credit terms in B2B trade.

Nearly 63.0% of the respondents in Greece  experienced late payment of invoices by B2B customers over the past year (respondents in Western Europe: 88.0%). This resulted in an average of nearly 32.0% of the total value of domestic and foreign B2B receivables remaining unpaid past the due date (average for Western Europe: nearly 40.0%). The  payment default rate recorded in Greece is notably lower than the average for Western Europe. This may be due to the considerably lower proportion of invoices defaulted on by foreign customers (14.0%) than by domestic customers (49.1% of the total B2B credit sales value). This reflects the much higher level of insolvencies  in Greece than in the majority of the countries in Western Europe. Over the past year, moreover, domestic default rates in Greece were twice as high as those in foreign customers.

Late payment of invoices (domestic and foreign) is reflected in the Days Sales Outstanding (DSO) figure posted by respondents in Greece. This averages 53 days (survey average: 48 days) and is nearly two weeks shorter than last year. This may reflect greater efficiency in collecting high value invoices. Fewer respondents in Greece (57.8%) than in Western Europe (63.7%) expect no change in DSO over the next 12 months. A worsening in DSO is expected by nearly 22.0% of respondents, in line with the survey average.

As Greek businesses are very exposed to domestic payment risk, protection of business profitability implies being confronted with a number of challenges this year. The biggest one is considered collection of outstanding invoices, which, on average, worries more respondents in Greece (17.5%) than in other Western European countries (11.9%). 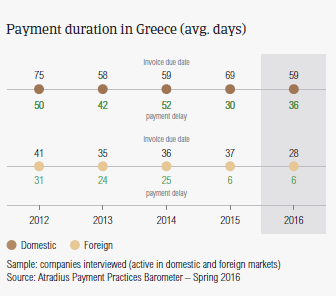 Foreign customers are requested to settle invoices on average one month earlier than domestic customers. This may suggest that Greek respondents offset the high level of domestic payment default with swifter payments of foreign customers. Over the past year, however, both the average domestic and foreign payment terms have tightened up by an average of nine days. This  may be read as an attempt of Greek businesses to balance out their tight financial conditions.

B2B customers of Greek respondents settle past due foreign payments on average in 5 days and domestic payments in 36 days after the invoice due date. This  means Greek respondents turn domestic past due receivables into cash, on average, nearly 100 days from invoicing (survey average: 53 days).  Foreign invoices take roughly two months less time. This corroborates the assumption that Greek businesses benefit from the swifter payment practices of foreign customers.

Based on what was observed earlier, it is not surprising that far more respondents in Greece (nearly 87.0%) than in Western Europe (57.9%) said that domestic B2B customers pay invoices late due to liquidity issues. This has not changed significantly compared to one year ago. Contrary to the survey pattern, the second most often cited reason for late payment of domestic invoices is not the intentional use of outstanding invoices by customers for their financial advantage but the inefficiencies of the banking system. This was cited by more than twice as many respondents in Greece (26.0%) than in Western Europe (12.5%). 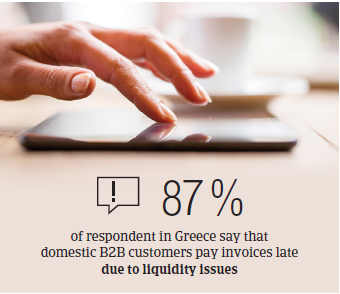 The proportion of B2B receivables, reported by Greek respondents as uncollectable, is on average three times higher than that at regional level (3.6% of the total B2B credit sales value, versus 1.3% in Western Europe). 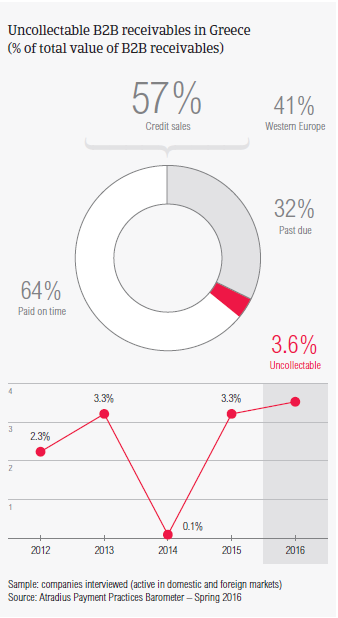 An above average (for the country) proportion of overdue invoices was generated by the food industry. According to most of the respondents (96%) this is likely to be chiefly due to liquidity constraints of customers in this industry.

Insolvencies are forecast to fall only 3% across advanced markets in 2016, the worst performance since 2012.

The slowdown in world trade: temporary or permanent?

Global economic growth is expected to be sluggish in 2016. Bankruptcies remain high in the eurozone and are rising in key emerging markets.