The percentage of Australian respondents reporting domestic and foreign late payments in 2017 (88.1%) has increased compared to last year (84.0%).

In 2017, Australia’s GDP growth is not expected to exceed the 2016 rate of 2.5%. A slightly more optimistic outlook is foreseen for 2018, when growth is expected to accelerate to 2.8%. Despite the country’s stable performance, there were fewer sales on credit terms compared to one year ago. 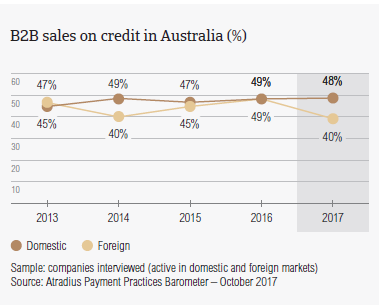 In 2017, respondents in Australia reported late payments from their domestic and foreign B2B customers more frequently than one year ago. However, the percentage of overdue B2B invoices remained stable.

Payment duration in Australia improved from an average of 50 days in 2016 to 46 days in 2017. This is also the shortest credit to cash turnaround in the Asia Pacific region this year. 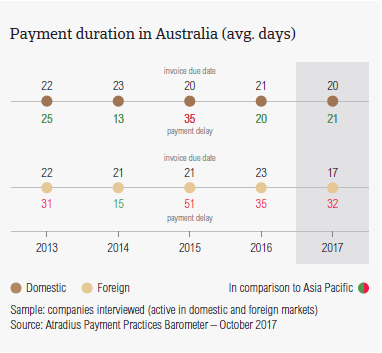 The most frequently reported reason for payment delays in Australia was buyers using outstanding invoices as a form of financing. This is different than in Asia Pacific overall, where the key payment delay factor reported is insufficient availability of funds. 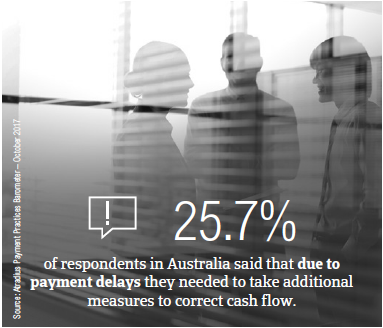 Next to their peers in Japan, respondents in Australia are some of the least likely in the Asia Pacific region to increase their use of credit management practices to protect themselves against risks stemming from Brexit, US protectionism and the slowdown in Asia. 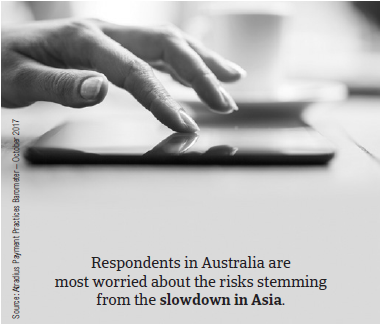 The total value of B2B receivables written off as uncollectable in Australia (1.6%) is far under the regional average of 2.1%. 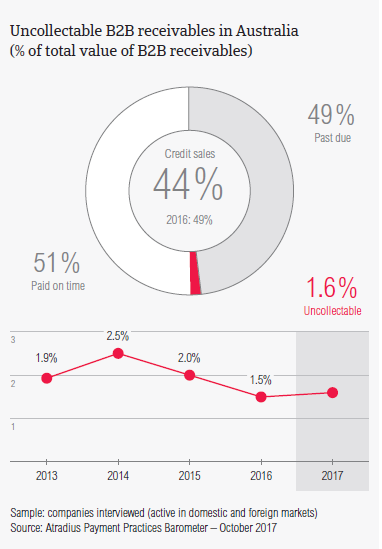 Looking ahead, more respondents in Australia seem to expect a slight deterioration than an improvement in the payment behaviour of their B2B customers over the coming 12 months. 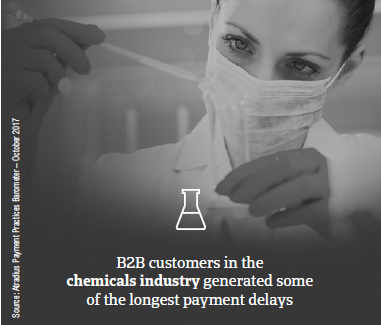 Atradius forecasts insolvencies across advanced markets to fall by 3.0% this year and 2.0% next year, particularly led by an increasingly robust recovery in the eurozone.

A modest recovery is forecast in the non-residential segment due to stronger private demand and activity picking up in the infrastructure building sector.